My most recent Cuban adventure!

Hola! I've been thinking about what to say in a "trip report" on my recent two-week stay in Cuba... That's how I began a Facebook post with a semi-brief report. It will serve as a base (original text in blue), which I will add to below. I have to warn you, though, I have a lot to say! So, grab a drink and snack, to tide you over as you read. Here we go...
Life in Cuba is difficult and expensive. Food and other basic necessities are randomly and inexplicably unavailable. When things suddenly appear in a store after a long absence, word spreads like wildfire and lines form. If you're lucky, you may get to buy what you've been needing. If you can't get to the store or don't want to stand in line, you can usually find things "on the street" later, due to the efforts of re-sellers. The black market is thriving in Cuba these days! But, of course, street prices are significantly higher than store prices; you're paying for not having to stand in a line for hours and for being able to use paper money (national currency) instead of a credit card.
For example, one of the largest stores in Pilón, where I was staying, was converted to an MLC ("freely convertible currency") store and reopened with a fresh supply of stock while I was there. The line-up to get in reminded me of a queue for concert tickets for a popular band. Cubans are used to standing in lines, and they have it down to a fine art. They don't actually need to be in a physical line, in fact! When someone new arrives, they will ask who is last in line. Thus, they know who to follow and, so, they can all relax and sit in the shade... if there is a place to sit, and if there's shade! 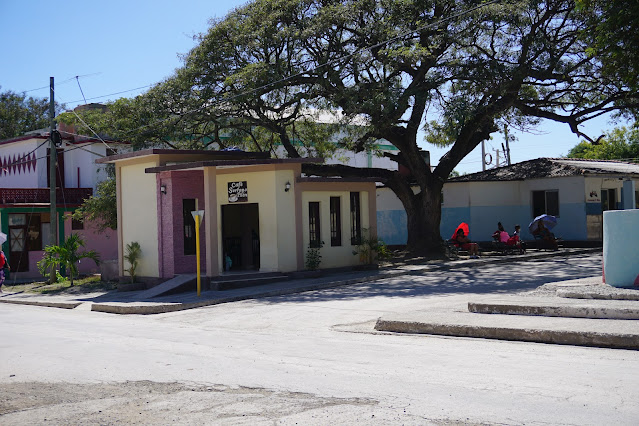 On opening day, one of my friends traveled from Mota (a village approx. 15 km away) and stood in line from about 8 a.m. to 3 p.m. before being able to enter. His goal was to buy shoes for his young daughter. By the time he got inside, however, all the girls' shoes in the appropriate size were gone. At least there were some boys' Crocs in her size. "She won't care that they are for boys," her parents said. They were just happy to have shoes that fit her. Shoes like Crocs (or knock-offs) are popular in Cuba because they are easy to clean, okay in rain and the loose fit means they will fit a growing foot longer than other types of shoes. If you are able to take footwear as gifts, they are a great, lightweight option for children or adults.

The MLC stores are now pretty much the only option and, in order to shop there, one must have a credit card. For Cubans, this means opening a special bank account where money (foreign or domestic currency) can be deposited and applied to what is essentially a pre-loaded credit card. Unfortunately, obtaining an MLC card is not a quick process, and it can be daunting as well as time consuming. Not all Cubans have MLC cards (especially in rural areas) and, if they don't, they cannot shop at these new government-run stores, since cash is not accepted. The MLC stores were instituted shortly before COVID began; discontinuing the use of the CUC ("tourist pesos") came hot on the heels of both. These three things occurred within such a short time frame that it was like a financial triple whammy for many families. Cubans are still paid in CUP, the national currency, but they now have to purchase most things with MLCs, which creates daily challenges.
If you have cash, you can buy things from other outlets but prices have increased astronomically. Produce is still available at street markets and roadside stands, as usual, but costs can be crazy. For instance, one vendor was selling a pineapple for 140 pesos (CUP); previously, it might have cost about 10 pesos. Everything has gone up, up and up in price – if the items are even available. During my recent visit, friends frequently commented on the price increases. Another graphic example of the insanity of current costs is this: a single plastic disposable razor (the kind you can buy in a bulk package at a Canadian dollar store) is now being sold for $2. I didn't ask if that would $2 CAD or $2 USD; the price is horrific either way.

Officially, the exchange rate at a bank is 24 pesos = $1 USD. But, if you're comfortable having your money changed on the street, you can get as much as 100 pesos for your American dollar in some places. Canadian money, of course, is less valuable but, even so, the street rates are better than a bank's. I started using a general calculation of 500 pesos = $25 dollars, with it being slightly over/under, depending on whether you prefer to think in CAD or USD. When I was out and about in Pilón, the cheapest rum I saw for sale was a bottle of Pinella for 500 pesos. Havana Club was significantly more! Wine is priced much higher (I saw one kind for 1,000 CUP), if you can find it, and beer is simply not available in that area at this time.
Challenges pertaining to food supply are most worrisome, especially regarding protein sources; for that reason, more people than ever are raising their own pigs. When possible, people are also growing their own vegetables. In this respect, those living in rural areas have an advantage because they have more space for gardens. I noticed quite a few patches of squash, both in yards of country homes and in town, as well as more backyard plantain trees. It was also the right season for tomatoes, so they were plentiful everywhere. These are great, of course, but protein is important. Rice and beans are staples of the Cuban diet and they do seem to be available now (a few months ago, they weren't), but they are more costly than "normal" – the new normal is pricey!

Since the places I visited (Pilón, Marea del Portillo, Mota and Niquero) are all along the coast, fish would seem like a natural option. When I was there, unfortunately, the fishing hadn't been good because of the unsettled weather. Wind and turbulent seas make it more difficult to catch fish! And, as with everything else, the price of fish has gone up, making a balanced diet on a tight budget a very big challenge. I took some cans of tuna with me, for the family I stayed with, but the weight of canned goods adds up quickly. 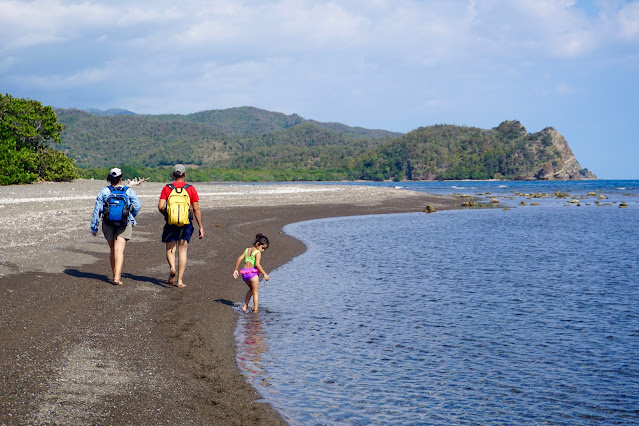 Those living in the rural region to the east of Pilón (Marea del Portillo and Mota), also have a special challenge to contend with: the roads. In that part of Granma, you can't drive for 2 seconds without seeing a "bache" (pothole). And, some of these craters are so large, you can't go around them – you have to drive right into them and hope you will emerge safely on the other side, muffler intact. Instead of 30-40 mins. to travel from Pilón to Mota, it now takes an hour, and it's difficult to find a taxi willing to make the arduous trip. For this reason, as well as the high cost of fuel, taxi prices have also risen significantly.
The day I visited the Marea del Portillo resort and village, my taxi rides cost 600 pesos each way. My trip to Mota, on a different day, cost 1600 round trip; on that occasion, I had the same driver for both directions. You can sometimes find a driver willing to do it for less but it's difficult. Most taxi drivers simple don't want to deal with that nasty stretch of road and, after seeing it, I understand. Some government officials recently visited the region and promised to repair the road from Mota to Pilón this year. People are skeptical, since they've heard this song before. But, a long section of the same road has already been repaired, beginning in Santiago and heading west toward Granma. So, the roadwork machines are moving in the right direction!
And yet, life goes on. Schools are in session and public events are beginning to happen. People smile and welcome guests into their homes (paying attention to COVID protocols). There are some cases of COVID in Pilón, as there are here in Ontario, but the concern is much less than it was; things are improving in that respect. Current Cuban regulations still require people to wear masks in all public places – riding in taxis, sitting in parks, walking along any street or road. The only time you're allowed to remove your mask in public is when you are "actively" eating or drinking. Most people are triple-vaccinated with one of Cuba's home-grown vaccines.
I was pleasantly surprised to find some new restaurants open in Pilón, though I didn't have a chance to try them all out. There were also several casas particulares (B&Bs) open in Marea del Portillo and Punta Piedra, as well as Pilón – I stayed at Casa de Noel, near the town's "malecón"... I've finally sorted most of my photos, some of which I've added here. If you want to see more, please check my Facebook page, where I'll post additional photos as I get them organized and processed.

Now we're in the home stretch of this lengthy report! In conclusion, I want to tell you about the humanitarian aspects of my trip. Thanks to the support of many wonderfully generous friends, I was able to purchase a LOT of medical/health supplies to take with me to Cuba. MUCHAS, MUCHAS GRACIAS! I want to give a special shout out to Denise, who was my personal shopper at Costco. She was able to get large bottles of ibuprofen, acetaminophen, naproxen, children's Tylenol, etc., etc.

I also took several packs of masks and an assortment of vitamins and pain meds. for arthritis and muscle strains. I distributed everything as equitably as possible, giving extra supplies to nurses and large families, who will share with each other (I took small zip-bags, so they could divvy up the large bottles as needed). All of these gifts were very much appreciated. I wished I could have taken more!

Since the Cuban gov't is currently offering an exemption on a suitcase filled with medical/health supplies and food, I took a 23 kg/50 lb. packed-to-the-gills duffel bag (topped up with rolls of toilet paper, when the weight limit was almost reached). As well, my other large suitcase and my carry-ons were stuffed with more medicine-cabinet items and other gifts – some of the things I'd been waiting to take for over two years. I felt like a Sherpa but, thankfully, I wasn't headed for a mountain of snow! 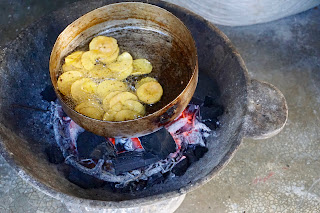 Well, that's my report. If you've read to the end, you deserve some chicharitas (fried plantain chips) – one of my favorite Cuban snacks!
Thanks again to everyone who was with me in spirit on this adventure in Cuba. The boat name in the photo below expresses my feelings: Shalom. 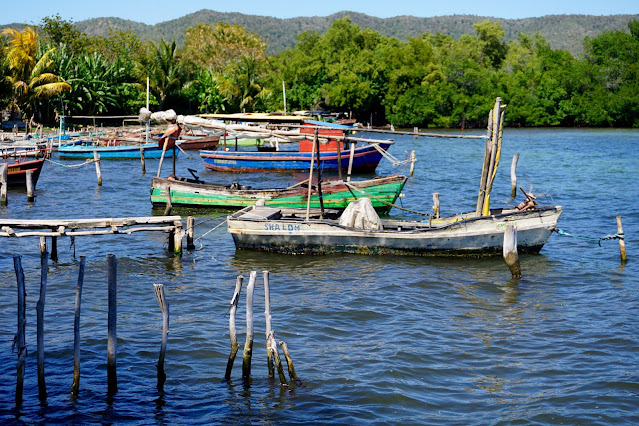