This will be a very interesting trip, whether you've been to Havana before or not.
We need to have at least 10 people sign up/pay by Oct. 30, in order for it to fly.
Send me an email, if you want more information: jennicacuba@gmail.com
If you're ready to book, just call my pals at P&G Travel: 1-877-586-8747
Brian Gordon Sinclair truly evokes the spirit of Ernest Hemingway! 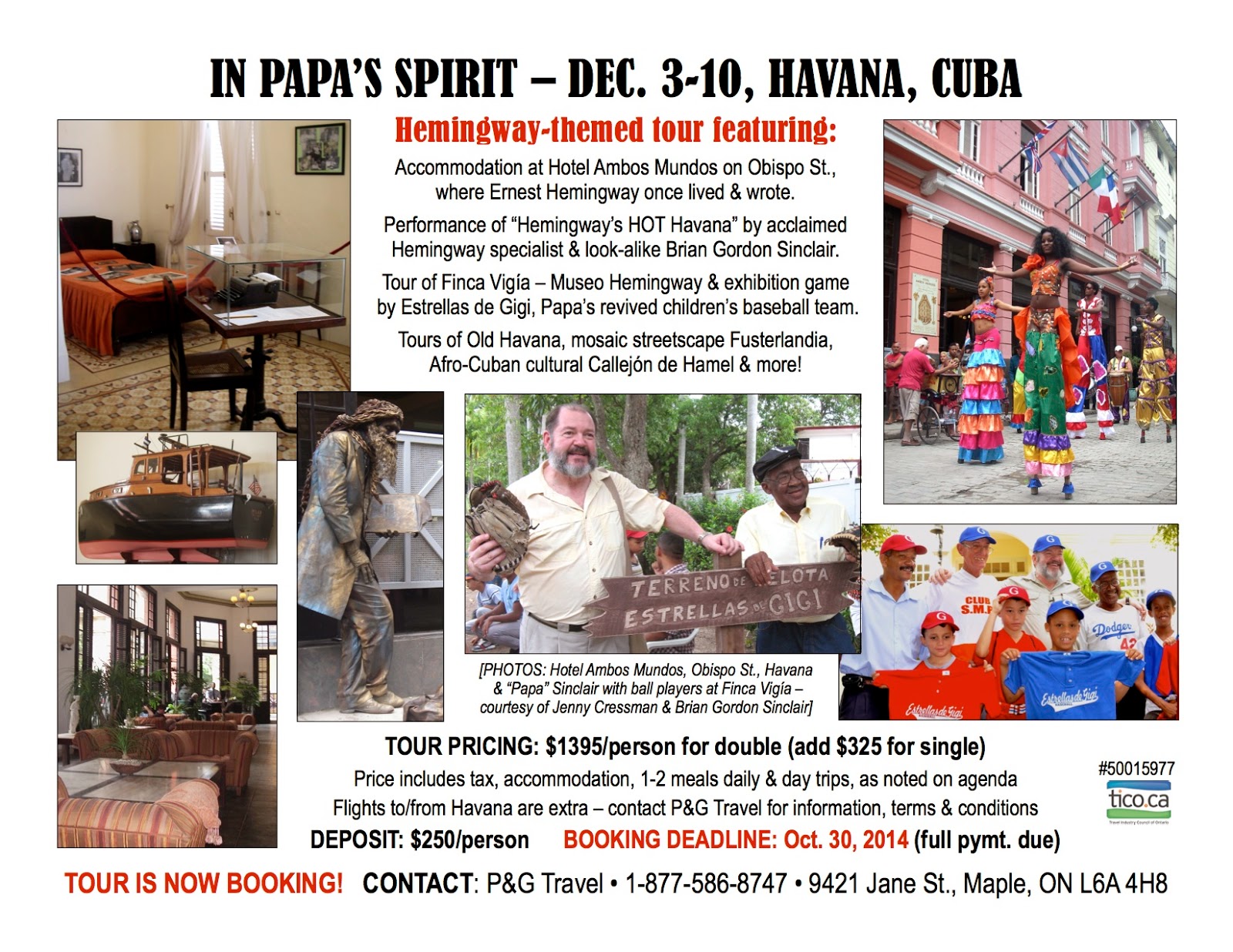 IN PAPA’S SPIRIT, A HOLIDAY EXHIBITION IN CUBA

Sinclair has an uncanny resemblance to the famous writer and, in fact, that’s what got him started on this unique career path. But, that’s not why he’s been successful and gained international acclaim; he’s also an accomplished playwright and actor, and has become an expert on Hemingway.

While visiting in Key West, Florida, about a dozen years ago, Sinclair was encouraged to enter a Hemingway look-alike contest. The following year, he returned to the Hemingway Days Festival and premiered a one-man play entitled Sunrise, which became the keystone for a series of solo shows under the Hemingway On Stage banner and, thus, his dramatic alter ego was born. His portrayals of Hemingway have been highly lauded by the late author’s family and have earned him awards and commendations around the globe, including Cuba. This recognition, on the Caribbean isle where “Papa” Hemingway lived for many years, also led Sinclair along another interesting path, and became the impetus for the trip he will be making to Havana, Dec. 3-10.

Last year, he was invited to be the patron of a revived version of a children’s baseball team Hemingway founded in the 1940’s at the village of San Francisco de Paula, near his beloved farm, Finca Vigía. “Papa” Sinclair will be overseeing the second annual exhibition game by the new Estrellas de Gigi team. He will also be providing ball equipment, uniforms and Christmas gifts for local youngsters, as well as reading them a holiday story, as Hemingway did annually.

This special exhibition is not a business endeavor for Sinclair, however; it is a heart-felt project he has happily taken on, in Papa’s spirit. With his permission, a tour has been shaped around this Dec. 6 game and story presentation, and he welcomes fans of Hemingway to come along and get acquainted with the country and some people who had such an impact on his life. “Everything that’s happened in Cuba,” he says, “has been a process of falling in love with Cuba and its people.”

While wearing the mantle of Hemingway during other activities in Cuba, Sinclair explains further, “an incredible bond” was very quickly formed with the people he encountered. In particular, he became profoundly attached to the community surrounding Finca Vigía, the recreated Estrellas de Gigi ball team and the last surviving member of Hemingway’s original team, Oscar “Cayuco” Blas, 84 – with whom Sinclair is now collaborating to write a book, The Homerun Kid: the True Story of Ernest Hemingway’s Baseball Team.

The “In Papa’s Spirit” tour participants will be able to meet Blas and see Sinclair in action as Papa, as well as touring Havana and the surrounding area. The group will be encamped at Hemingway’s haunt, Hotel Ambos Mundos, where Sinclair will perform his play, Hemingway’s HOT Havana, free of charge. 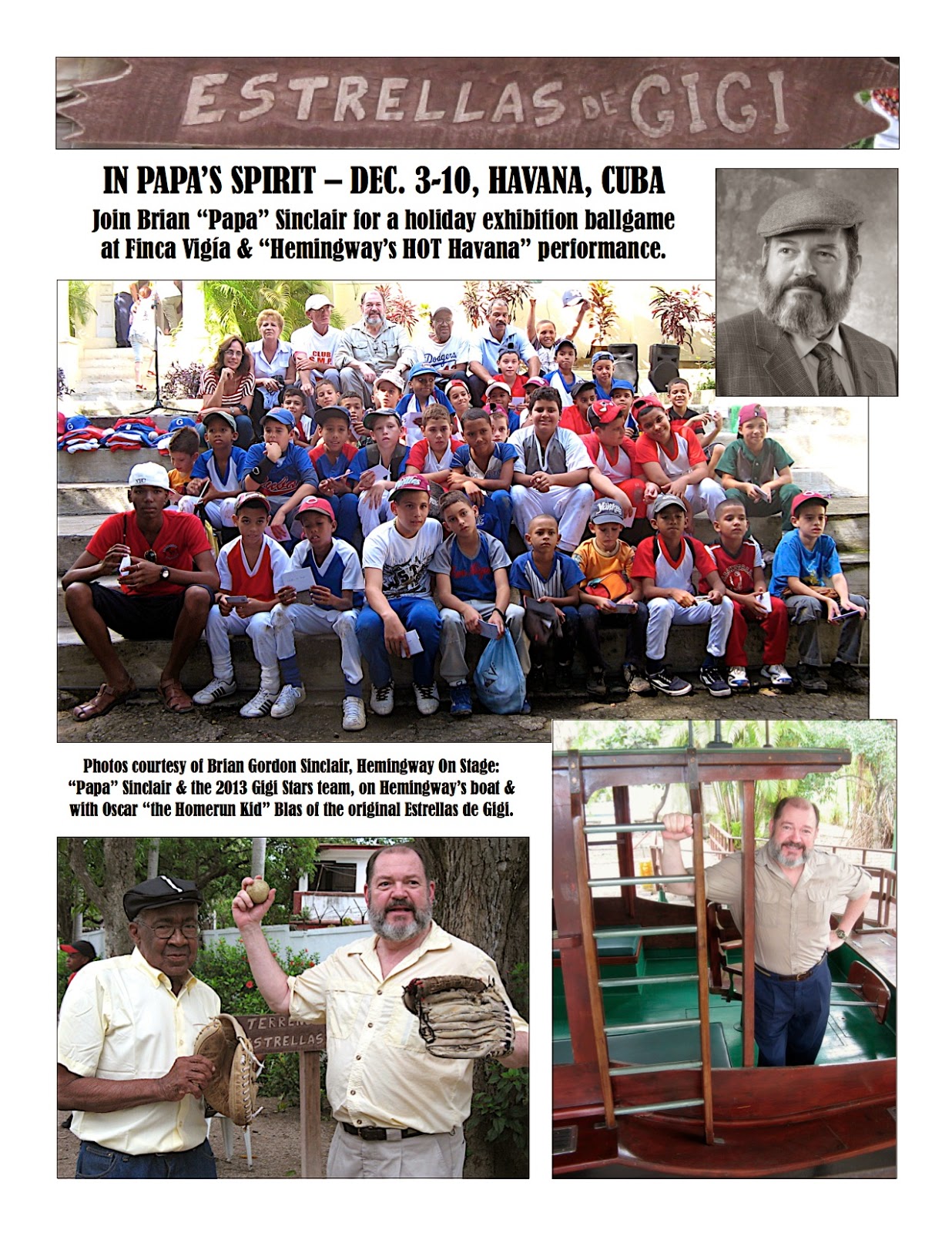 This Dec. 3-10 tour will be based at Hotel Ambos Mundos, where Ernest Hemingway once lived. Special features will include a children’s all-star baseball game, Christmas story and gift presentation at Finca Vigía by Brian Gordon Sinclair as “Papa” Hemingway.

Cubans love baseball. So did Ernest Hemingway. He even had his own team, made up of children from the San Francisco de Paula neighborhood near his Havana-area estate, Finca Vigía (Lookout Farm).

Established in the 1940s to provide an activity for Hemingway’s boys, when they visited the family home, the “Estrellas de Gigi” (Gigi Stars) was named for his youngest son, Gregory, who was nicknamed Gig or Gigi. A few years ago, this team was revived and an honorary “Papa” was named as its patron – Brian Gordon Sinclair, internationally acclaimed playwright and performer from Alliston, Ontario, who is a Hemingway specialist and renowned look-alike.

In his role as team patron, Sinclair has also revived Hemingway’s tradition of telling a Christmas story to the local children and presenting each with a small gift, as well as supplying them with baseball uniforms and equipment. This year, an exhibition game by the Gigi All-Stars is planned for Dec. 6 at Finca Vigía – Museo Hemingway. Following the game, Papa Sinclair will read a holiday story entitled The Pirate Night Before Christmas, written by Sammie Mays, Honorary Mayor of Key West, and illustrated by Ron Thomas, another Hemingway Look-Alike Society member.

Sinclair has invited his fellow “Papas” and their families to join him for this Hemingway-inspired holiday event, and you’re invited too! Both Mays and Thomas will also be on hand for the presentation of their book. In addition to the special Dec. 6 activities, guests will be treated to a full tour of the estate. Now a government-run museum, it houses Hemingway’s prized 38-foot (12 meter) fishing boat Pilar, as well as an incredible selection of art and artifacts, books and trophies from the legendary author’s collection.

The original farmhouse of Finca Vigía was built in 1886 on a hill about 9 miles (14 km) away from downtown Havana, and is now on the World Monument Fund list of endangered historic sites. Hemingway initially rented the property while writing For Whom the Bell Tolls but subsequently bought it with royalties from that book. He lived at the finca throughout the 1940s and ‘50s with sequential wives, Martha Gellhorn and Mary Welsh, and was frequently visited by his three sons. During this period, he wrote The Old Man and the Sea.

In his seven Hemingway On Stage productions, Sinclair explores both the writing and life of Ernest Hemingway. Six of these plays form a series that enact various periods in Hemingway’s lifework – his early years and during times of war, his Spanish bull fighting and African game hunting adventures, his relationships with art and literary luminaries in Paris and, ultimately, his latter days and death. Sinclair has written other acclaimed plays, but it is for his performances about and as Hemingway that he has received the most accolades and awards.

The British Stratford-upon-Avon Herald noted that Sinclair “is considered to be the world’s foremost interpreter of Hemingway,” and the Canadian Stratford Shakespeare Festival gave him the Sir Tyrone Guthrie Award for his acting. Besides Great Britain and Canada, he has also performed in Denmark, Holland, Norway, Poland, Russia, Spain and, of course, Cuba and the United States, where he got his feet wet on this dramatic path by participating in a Hemingway Look-Alike contest in Key West. His appetite thus whetted, Sinclair’s first one-man play in the Hemingway On Stage series, Sunrise, premiered the following year during Key West’s 2003 Hemingway Days Festival.

His work has been highly commended by members of the Hemingway family and many others, and he has been given two awards of distinction in Cuba. Beyond this universal praise, however, Sinclair received a profound testament to the spirit with which he imbues his portrayals of Hemingway when he was invited to be “Papa” to the rejuvenated children’s baseball team in the village of San Francisco de Paula.

When Ada Rosa Alfonso Rosales, Director of Museo Hemingway, and Oscar “Cayuco” (the Homerun Kid) Blas, the last surviving member of the original Estrellas de Gigi, were ready to revive the team, they asked Sinclair to be the patron. The man behind the Hemingway persona has declared that, “never in a million years” did he think he would have a baseball team. But, he has taken on the cause and loaded the bases. He is collaborating with Blas, 84, to write a book of memoirs aptly titled The Homerun Kid: The True Story of Ernest Hemingway’s Baseball Team. As well, he invited a film crew to make a documentary about the project and Sinclair’s other work in Cuba; it is expected to be part of the 2015 International Hemingway Colloquium in Havana, and will also be shown at the annual Cuban Film Festival.

And now, you’re invited to join Brian Gordon Sinclair, in the spirit of Ernest Hemingway, and enjoy an exhibition baseball game by the new Estrellas de Gigi, a holiday story presentation at Finca Vigía, a live performance of Hemingway’s HOT Havana, and a truly special travel experience in Cuba!

Hotel Ambos Mundos, located on intriguing Obispo Street in the heart of Old Havana (Havana Vieja), will be the group’s home base for this 8-day tour. All breakfasts are included, as well as some lunches and dinners.

DEC. 3: Those arriving at the airport today will be met by a tour representative and escorted to Ambos Mundos in Havana. After everyone has gathered at the hotel, there will be a group briefing, followed by an evening walk through the oldest part of the city, Havana Vieja. Dinner is included tonight.

DEC. 4: The exploration of Havana Vieja will continue today, with visits to some of Hemingway’s famously favorite haunts, including the hotel room in Ambos Mundos where he lived and wrote, as well as El Floridita, a bar where you can enjoy a Hemingway daiquiri and some live music during lunch (included). The afternoon and evening will be free. Perhaps you’ll want to watch the sunset from the hotel’s rooftop bar while sipping a mojito!

DEC. 5: This morning, you’re off to visit Finca Vigía, Hemingway’s beloved home, which is now a museum, and then Cojimar, the picturesque fishing village where he kept his boat. You’ll have lunch on your own in the village. This evening, the group will be treated to a performance of Hemingway’s HOT Havana by Brian Gordon Sinclair, also known as Hemingway On Stage.

DEC. 6: Today, the group is invited to attend the Estrellas de Gigi exhibition baseball game and special activities hosted by Papa Sinclair at Finca Vigía. In addition to the game, Sinclair and friends will read the holiday tale, The Pirate Night Before Christmas, and present the local children with small gifts, as Hemingway used to do.

DEC. 7: The entire day is free for sightseeing on your own. If you haven’t done so already, you may want to take a coco-taxi or vintage car ride along the malecón, stroll the tree-lined Paseo del Prado, visit some nearby art galleries and museums, and/or relax by the piano in the Ambos Mundos lobby and watch the lively Obispo streetscape.

DEC. 8: A tour of modern Havana is on the agenda today, including a visit to the marina named for Hemingway and lunch at the fishing village of Baracoa, just west of Havana. The afternoon will be free for more of your own exploration, upon returning to the city. If you’re looking for an interesting place to have dinner this evening, you may want to go to Bodeguita del Medio, just a few blocks from the hotel, which was patronized by Hemingway and other famous folks.

DEC. 9: During this last full day of your tour, you’ll have an opportunity to see Compas, a contemporary dance troupe, in rehearsal. As well, the group will visit two fascinating, artful streets – Fusterlandia, the incredible mosaic creations by José Rodriguez Fuster that shaped the landscape of Jaimanita, and Salvador Gonzalez Escalona’s urban art project, Callejón de Hamel, which celebrates the Afro-Cuban culture and Santería spirituality.

DEC. 10: It’s time to pack your bags, bid Hemingway’s one-time home farewell and take the transfer to the airport for your flight home.

Posted by jennicacuba at 12:51 No comments: