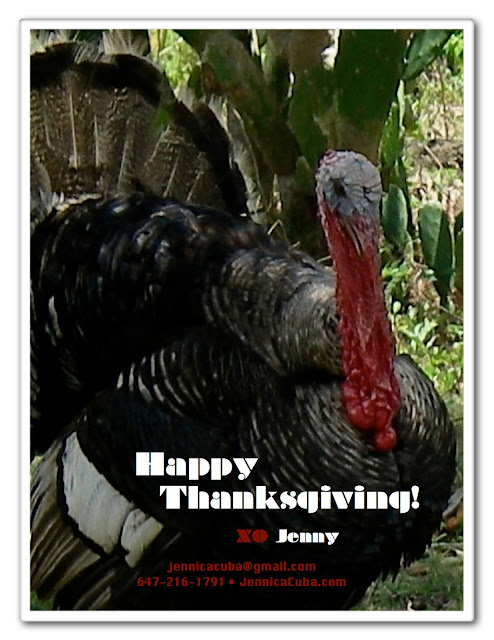 Thanksgiving greetings to all... albeit a bit early for some!

Since I live in Canada, the October harvest celebration takes precedence on my calendar, just as the November one did when I was growing up in the U.S. The Canadian Thanksgiving is also a personal marker for me because it means I'll be going to Cuba again soon!

At the end of October, my group of 24 will be heading for Marea del Portillo, my favorite little place in southern Cuba. After the group goes home this time, I'll be staying a couple of extra weeks to work on my writing. I'm nearing completion of my second novel, which is primarily set in Cuba, so it's nice to be able to write right there! Once it's done, I hope to find a publisher for both Cuban Kisses and the sequel, Cuban Missus. They blend romance and adventure with information about Cuban culture and history.

Since I'll be in Cuba for much of November, I won't be able to send a separate greeting at the appropriate time for the Americans on my email list. So, please consider this your well-in-advance good wishes for a lovely Thanksgiving!

Speaking of Americans, I'm looking forward to hanging out with some nice folks from that side of the border in January, when I'll be leading a tour of Cuba, from Holguin to Havana, Jan. 7-19 (flying out of Toronto). I can still add a few more people to that group; please contact me in the next two weeks, if interested.

Thinking further ahead, I usually lead a group trip to Marea del Portillo after Easter but, because that holiday isn't until April 21 in 2019, I may shift the departure date forward in the month, if I can get good prices. Stay tuned!

One final thought about future trips... a number of people have asked about going to Cuba when school's out for the summer. It would be quite hot in July or August, of course, but Cuban buses and most hotels have air conditioning. I'll send out an email later to suggest options and assess interest. Meanwhile, give it some thought. I'm game, if you are!

Hasta luego!
Jenny
Posted by jennicacuba at 13:35 No comments: